As we reach the end of the year, and the latest instalment in our national drama plays itself out, I am sure we’re all taking a moment to stop and reflect on the year that has passed.

At GSC, like for many people, it has been a very mixed year. We have celebrated some wonderful results, achieved amazing new goals and worked with some of the most talented, hardworking people you could ever wish to meet. On the other hand, we would be remiss not to say that it has been a challenge.

GSC receives no core public or local government funding and operates on 84% earned income, meaning the pressure on ticket sales is huge, even more so at a time when people are watching their pockets.

Our 13th year has seen us play to almost 14,000 people, stage five Shakespeare titles, (three of which are rarely played), in five different venues including three brand new ones, and engage with over 4200 people through our Education and Outreach Department. In such unstable times, some of these choices were huge risks to take, but we’re committed to ensuring our audiences have exceptional theatre experiences which are not just the preserve of London or that come with a hefty price-tag.

Our year opened with MEASURE FOR MEASURE, our 40th show. The play is a timely examination of a society in flux, with themes of the abuse of power, betrayals of trust and sexual harassment, making it astonishingly relevant. In order to encourage discussion around entrenched preconceptions of gender and power structures, six characters gender-swapped at the interval, and the show was re-told from the beginning.

Retiring collections were made at every performance to support Guildford Rape and Sexual Abuse Support Centre generated £570.80.

Our year ended with ALL'S WELL THAT ENDS WELL . This was not only was GSC’s first co-production with another theatre, but also our first show to be staged in London. The opportunity to take our work to a wider audience for the first time, and at such a prestigious venue (Jermyn Street Theatre), was a hugely rewarding opportunity for our development. To spread not only the word of GSC and Guildford, but also that unique, imaginative theatre experiences are produced in our smaller towns is incredibly important. Such collaborations enable theatre, and its audiences, to thrive.

“I have a profound love of the great man’s work [Shakespeare] and must have seen several dozen performances of his plays in my lifetime. Some have been so-so, other’s adequate, and many excellent.  A few have been mesmerizingly wonderful, and I saw one such on November 2nd.  Seemingly strange to report, it wasn’t here [Stratford-upon-Avon] or in London but in Guildford.” Audience Member

This production has garnered FIVE nominations in the prestigious Off-West End Awards, including Best Production.

The fruity filling of our 2019 main house programme is, of course, the annual open-air season, which this year featured two classic Shakespeare comedies: TWELFTH NIGHT and THE MERRY WIVES OF WINDSOR.

Our regular celebrations around SHAKESPEARE'S BIRTHDAY saw our popular Sonnet Walk Weekend return to the streets of Guildford, featuring hidden digital performances from Brian Blessed OBE and Dame Penelope Keith. For our YOUNG COMPANY’s public performance, the historic Guildhall was taken over for an immersive production devised by the young actors, whilst the rarely seen King John received a staged reading in St Nicolas’ Church.

Across the year we created 120 jobs for artists and creative professionals, and despite the fact that Shakespeare is the main output of our work, and only 13% of the canon is represented by women, GSC continually operated a 50/50 gender balance across our business.

In June our Co-Founders were announced as winners of the Institute of Directors Director of the Year Awards for the London and South region. Representing the arts and Guildford at this level, on a national stage alongside businesses whose turnover is £50m was a huge privilege. 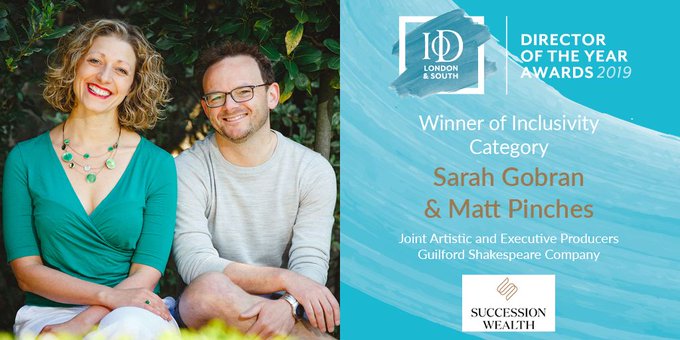 “The winner of this category is working extremely hard along with adapting and shifting not only in one area but from a perspective of race, sexuality, disability, mental health; the possibilities for this winner seem relatively endless at this point. The work being delivered is changing people’s lives. A clear winner!” (IoD Testimonial)

Earlier in the year, the charity were also the recipients of the Community Consideration Award at the Surrey & Hampshire Biz Awards.

2019 saw the culmination of our first year of programmes specifically targeting the least advantaged in our community. BRAVE NEW WORLD is a series of projects that are designed to promote social inclusion and social mobility. From working with elderly care-home residents to being the resident theatre company in a local school, from tours to primary and secondary schools to a mental health programme for families, these projects engaged with 3218 individuals through free-to-access performances, workshops and therapy sessions.

Our 8 in-house weekly drama clubs, including GSC SATURDAYS, SPRITES and the SUMMER HOLIDAY CLUB, remained popular with their own friendships and communities being formed within them. Parents and teachers reported to us that children in our programmes have become more confident and motivated in their everyday lives.


The final months of the year have been filled with confirming our new long-term home. From August GSC were in a race against time to secure a new base for the charity’s operations, having been given notice on the current building. Without the vision and generosity of the NEW BEGINNINGS Benefactors (launched during our 10th Anniversary Year in 2016), we simply would not have been in a place to make this happen.

Matt Pinches (GSC Co-Founder): “Facilities for visiting artists and community groups will be vastly improved, our education and life-changing outreach programmes will be much better supported and we can begin to securely plan for the future.”

In a climate where there is so much uncertainty and apathy, it has never been more important for the arts to lead the way in providing hope and cohesion for our society. The more opportunities that we create as a society, the more we learn and the richer we become. GSC is a theatre company with its community at its heart, and we are proud to play our part in ensuring it continues to be a vibrant, accessible and inclusive place to live and work.

A huge thank you to everyone who has supported us in 2019. Whether it be buying a ticket and a programme, visiting the bar, adding a donation to your booking, becoming a GSC Friend or Patron, supporting our Brave New World initiatives, sponsoring a production, giving advice, lending a hand or just taking a flyer on the street… you have all contributed to our success this year, and the many lives you have helped transform.

We also extend a massive, heartfelt thank you to all the actors, directors, designers and creative professionals that we have had the great fortune to work with this year, and of course our wonderfully supportive Trustees and the incredibly hard-working GSC Operations Team.

We hope you all have a peaceful Christmas and wish everyone a Happy New Year.