Since 2011 we've been staging a special series of one-off events to celebrate Shakespeare's Birthday, 23 April 1564.

These have featured talks, walks, special performances... and of course Birthday cake!

Check out how we marked the Bard's Big Day in 2020 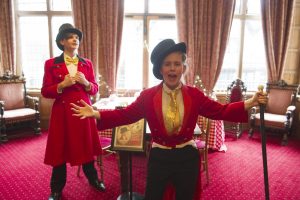 “That was the most inspiring evening” Audience member 2017

They're back! Our flagship youth theatre, the GSC YOUNG COMPANY present their annual public performance.

Devised and performed by our group of 12 – 18 year old aspiring actors, the performance is based on Shakespeare's gripping thriller MACBETH.

The company have been working on the play since September, which cleverly intertwines characters, themes and scenes from Macbeth into a brand new story called THE DARK ROOM.

Read the interview from 2019's cast

"The end crowns all,
And that old common arbitrator, Time,
Will one day end it." (Hector, Act 4 Scene 5)

A brilliant combination of Homer's The Illiad and Geoffrey Chaucer's Troylus and Criseyde, Shakespeare's 1603 play is passionate story of love and betrayal.

It is the seventh year of the war between Greece and Troy, sparked by Greek Helena's elopement with Troy's Paris.  The war is at stalemate, and into this comes Troilus, a Trojan soldier in love with Cressida, daughter of Calchus, a Trojan who has defected to the Greek army. After spending just one night together, the pair are separated when she is ordered to join her father in Greek army in return for a Trojan prisoner. Almost immediately Cressida betrays Troilus by becoming the lover of the Grecian Diomedes. As the Siege of Troy begins once more, Achilles kills Hector and Troilus, fuelled with anger, sets out on revenge...

Relive the actors, and their pieces, who featured in the 2019 weekend

Our ever-popular Sonnet Walk Weekend returns for another magical mystery walking-tour where you’ll encounter Shakespeare and his characters in the least likely of places. What is a Sonnet Walk?

2021 marks the 9th year of the walks and all details are still under wraps, but you can be confident this will be an experience not to miss! Previous venues have included West Horsley Place, Stoke Park, and River Wey Navigations, as well as a plethora of sites all over Guildford Town Centre.

Devised and directed by Matt Pinches