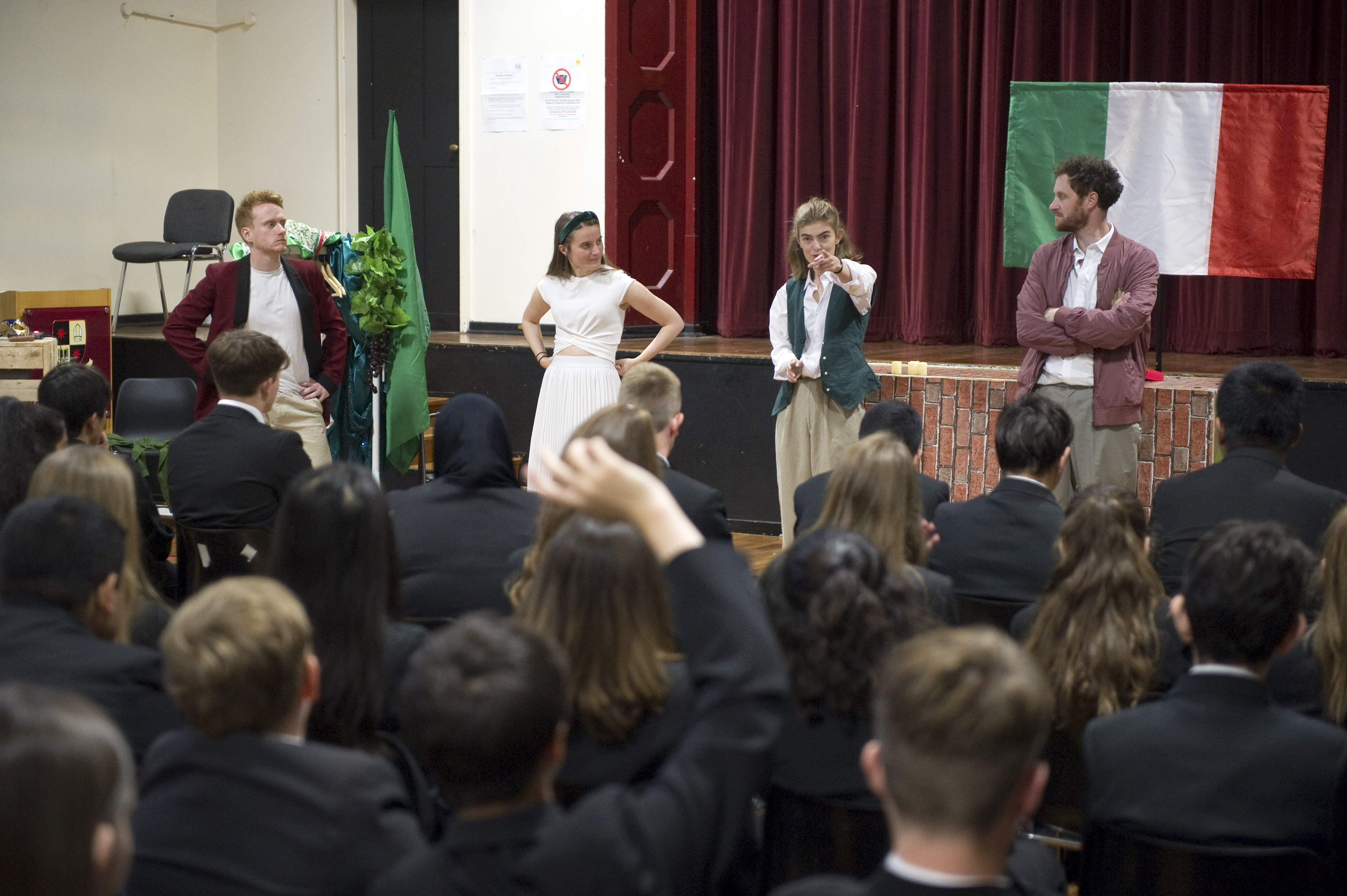 Our secondary schools tour, entitled The Play’s The Thing, tours specially adapted versions of Macbeth and Romeo and Juliet to GCSE students across Surrey. The tour is completely free-to-access for the schools and the actors remain at the schools to run workshops after the performance.

We caught up with the cast of four – Jack, Leonora, Joanna and Marco – at the end of their first week, to find out how it was going…

Ant: Hi everyone. What’s it been like putting both shows up on their feet?

Joanna: So far so good! It’s been really fun and also a good challenge to adapt each show to the space that we’re in. It’s meant a lot of quick thinking but it’s kept the shows fresh and alive

Jack: It’s always a big transition when you go from a rehearsal room to a full audience. You tend to learn a lot very quickly. They become the fifth member of the team. It’s fair to say that even if a reaction is not the one you expected, the very fact that there is a reaction is a good thing. Hopefully it means they are engaged. In a way a younger vocal audience seems like it might be the most similar to the audiences back at the globe in Shakespeare’s day. They were vocal. It requires a greater concentration from us as actors compared to a traditional fourth-wall show. But, for me, that’s more exciting.

Leonora: It’s been fab performing the shows in new venues, and seeing how year 10 and 11 audiences respond to Shakespeare (giggles, gasps and gags galore). As Jack says, while it perhaps takes extra effort for the actors when an audience is vocal, it’s been really fun to try and work with that to get the audience on side, and interesting to see which bits of the stories get the biggest reactions!

Marco: I very much echo a lot of the stuff that has already been said! For me acting wise one of the best things – challenging in a positive sense – has been adapting quickly to slightly different spaces each time, with both shows. This keeps us on our toes and makes us reactive as actors. 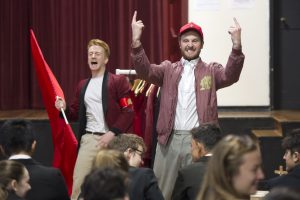 Ant: How have the schools and your young audiences reacted?

Joanna: The students have seemed to enjoy it! We had some very scared and disgusted faces when the witches came close and Romeo and Juliet has had its fair share of chanting at the start and giggles at the more intimate moments, but I think for the climaxes of both shows there’s generally been a very engaged atmosphere and the students have been up for discussing the plays in the workshops.

Marco: Another very interesting audience reaction has been moments of what feels like uncomfortable laughter; at onstage deaths, or some of Macbeth’s orders. I think it’s such an interesting dynamic that when students are engrossed but uneasy about what they are seeing, the reaction is laughter. The workshops have generally been great, with some really attentive groups so far.

Leonora: They have had amazing questions and insights on everything from Shakespeare’s language and social context, to the nature of our jobs as actors and what it’s like to bring stories of both intimacy and violence to the stage.

Marco: The extent to which different groups are keen to get scenes on their feet varies, but all groups so far have shown a great engagement with the text!

The Play’s The Thing is part of Brave New World, GSC’s on-going programme of outreach projects, which seeks to reduce social isolation and assist disadvantaged schools and individuals across Surrey. For more details, visit our Outreach pages, or contact Ant Stones, GSC’s Head of Education.