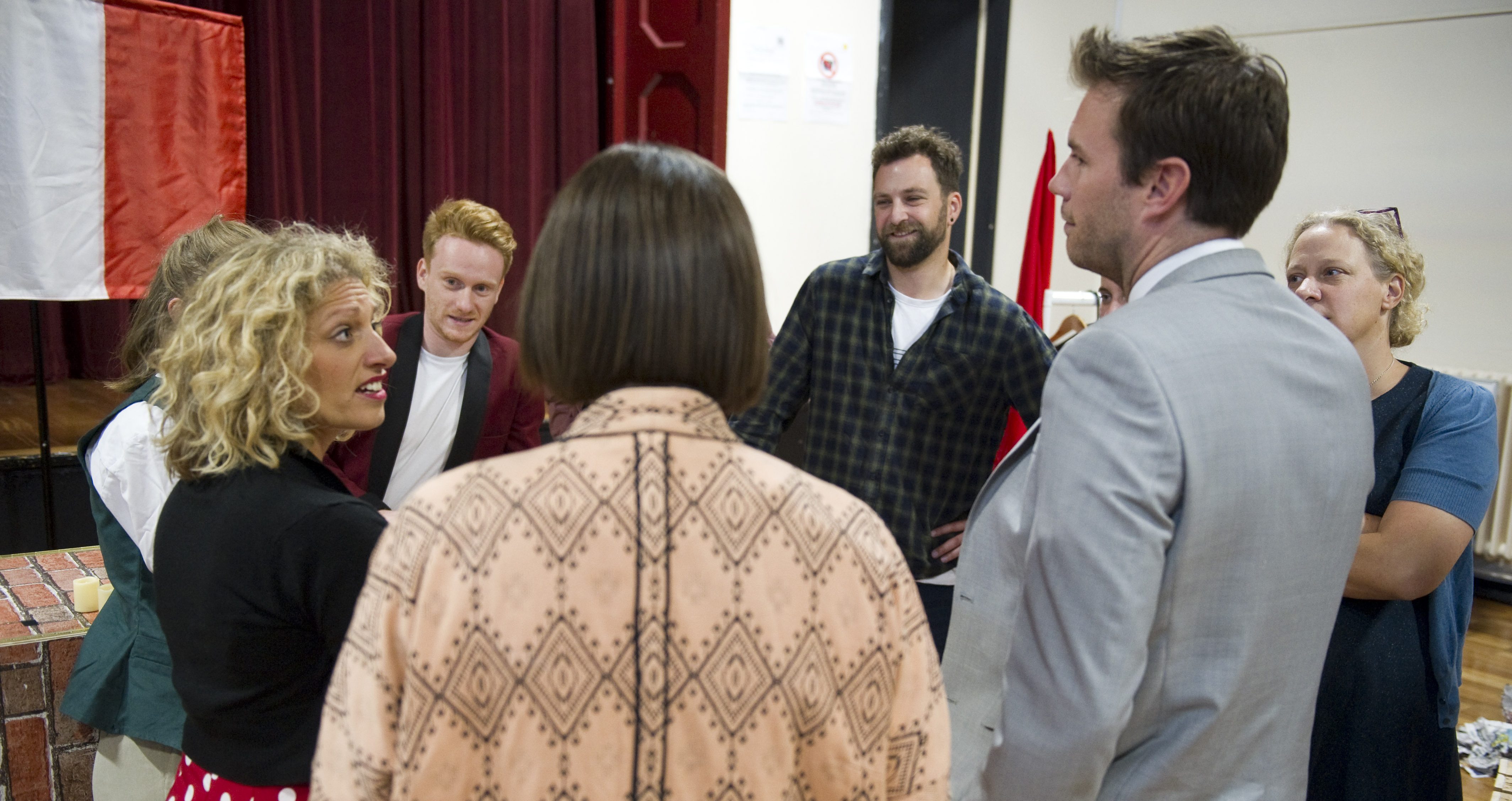 At the end of each performance on our schools tour the cast hold a Q&A with the students. This is a great chance for them to answer any queries the students may have on the play – its plot, theme and characters – as well as Shakespeare in general. Sometimes the teachers get involved too, which is how we were confronted with the above question – Did Shakespeare bottle it?

The question was specifically related to Juliet and her death. As such a strong woman in the play, who defies her family throughout, is her suicide an act of final rebellion and a pro-feminist message from the author? Or does her death act as a warning to all women; step outside of your expected roles and punishment awaits?

This question was deliberately chosen to spark debate and it did a great job. My mind was instantly filled with about a thousand thoughts and I think it filled the female members of GSC’s staff with around a million. It was a great question and before considering any specifics of Shakespeare’s plays his plots and characters, I think it’s worth reminding ourselves of Shakespeare’s position as a writer.

This is a man who had to work under several constraints. He was an establishment figure with direct links to the monarchy. His company became The King’s Men – their patron was King James himself – so if the divine ruler of your country is interested in witches, then it makes sense to entertain him with a play inspired by those ‘black and midnight hags’ (Macbeth). On the other hand, you’ve got to be careful, if you’re writing a play about a rubbish ruler who has ‘let slip’ the rules of country and caused chaos amongst his subjects, you’d better make it clear that you’re not drawing any parallels but make sure the ruler’s a Duke – definitely not a King – and place the story in a foreign city like Vienna (Measure for Measure).

Another important thing to remember is that Shakespeare was writing popular entertainment. Theatres were the cinemas of the day with a need to appeal to the masses. Shakespeare needed to find ways to engage with all sections of society; the highest classes, the lowest and everyone in between. If the play is mostly concerned with the high drama within a royal household, then it’s probably a good idea to throw in a charming, pickpocketing rogue in the second half (The Winter’s Tale). Just like Hollywood makes certain choices to maintain their PG rating and maximise their audience, it’s fair to assume Shakespeare made certain choices to keep his audience happy.

This is not to say that Shakespeare doesn’t push the form of theatre and ask us to question society. In my opinion, his single greatest quality as a dramatist is to explore the humanity of all his characters. It doesn’t matter if they’re a man or a woman, high-born or low born, black or white, Christian or Jew. Shakespeare is interested in his characters as fully-formed individuals. In The Merchant of Venice, Shylock isn’t your traditional pantomime villain as many Jews on stage would have been portrayed at the time He is a man subjected to incredible cruelty by Christians, who dominated England in Shakespeare’s time. In Othello, the title character is far more than a barbaric warrior. He is a noble and valiant hero, who is pursued relentlessly by a manipulative (presumably white) liar.

Cynics might say that this approach simply creates good drama, but you can’t deny that Shakespeare often fights the assumed opinions of his time to really delve into his characters as three-dimensional beings with their own struggle and desires.

And so, to return to Juliet, here is an undoubtedly strong female character (she’s hardly alone in the canon, either – Lady Macbeth, Rosalind, Viola, Hermione, Tamora, Queen Margaret – there’s quite a list). She is by far the more calculated and intelligent half of the star cross’d lovers, always aware of her situation; philosophising on the validity of the ancient grudge and constantly reminding Romeo of the threat they face in the wider context in Verona, while he blunders from one situation to another.

JULIET
How camest thou hither, tell me, and wherefore?
The orchard walls are high and hard to climb,
And the place death, considering who thou art,
If any of my kinsmen find thee here.

The recklessness of men and the destructive nature of the patriarchy is completely exposed throughout some of Shakespeare’s best scenes. Mercutio fights Tybalt without any real personal need and is slain for his rash actions. As a direct result, Tybalt dies at Romeo’s hands, who kills his wife’s cousin on their wedding day. The elder generation don’t act any better, either with Lord Capulet threatening to beat Juliet and force her from his house if she doesn’t obey his command and marry a man she barely knows. Against all this, is it any surprise that Juliet decides it’s better to take her life than live in a world that clearly won’t let her make her own choices?

This isn’t to say that Shakespeare portrays suicide as a romantic choice. Killing yourself in his England was an act against God. Aside from the fact that Juliet dies, she also condemns her soul to hell for eternity. This theme, of the earthly versus the eternal, crops up time and time again throughout Shakespeare (Hamlet’s ‘To be or not to be’ and Macbeth’s ‘If it were done when ’tis done’ speeches are just two famous examples) and it must have weighed heavily on the minds of the audience. Would they have sympathised with Juliet’s suicide as her last and only option, or would they have seen it as a weak and sacrilegious act?