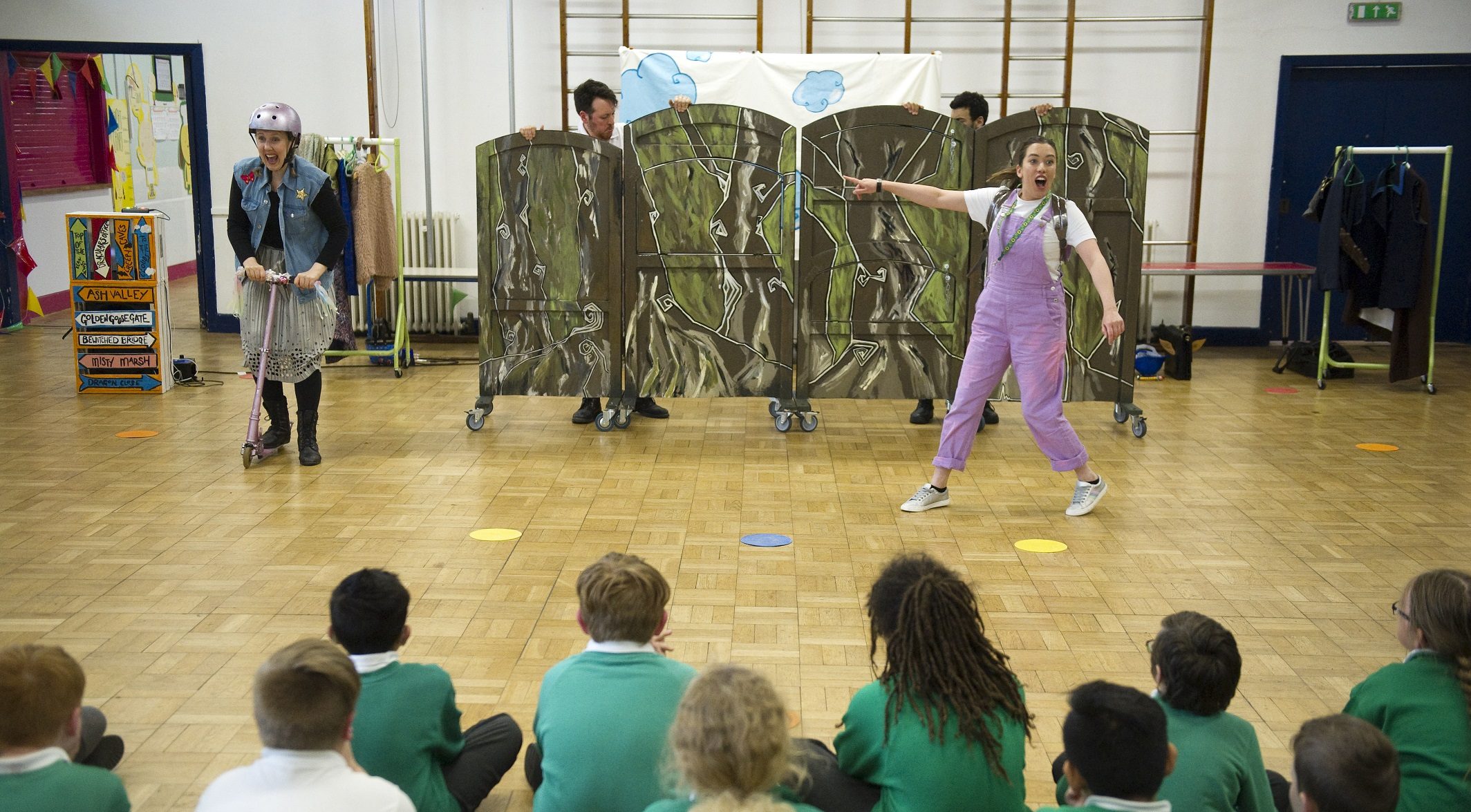 This Spring, we’re touring The Purple Princess to primary schools in Surrey, in order to raise awareness of epilepsy. The show has been funded by South Western Railway and was inspired by the real-life experience of its Director, Indiana Lown-Collins, who has uncontrolled epilepsy.

The Purple Princess merges modern life with fantasy creatures. The Princess wears glass trainers and meets trolls at the train station, grumpy commuter elves and dwarf construction-workers (or maybe they’re just digging for gold). When the Princess has a seizure on a train, her best friend, a trainee fairy godmother, rewinds time to help her. With the help of the children in the audience, the characters react to the seizure, so the Princess has the best chance of a positive recovery.

“1 in 20 people will have a seizure in their lifetime and many more will witness one. Knowing what to do is crucial and can save someone’s life. On many occasions, I’ve feared for my life because I couldn’t get the help I needed. Hopefully, by raising awareness, people with epilepsy will have a more positive path through life.” Indiana Lown-Collins, Director of The Purple Princess

Named after Purple Day, the international day for epilepsy awareness, the show was created with support from The Epilepsy Society and Epilepsy Action. The guidance within the story is taken from The Epilepsy Society’s “Calm, Cushion, Call” campaign. These three simple instructions – stay calm, cushion their head with something soft and call for an ambulance – are the basis of seizure first aid and could help save a life.

The play has been written by Ant Stones, GSC’s Associate Playwright, and directed by Indiana Lown-Collins. To further champion those living with hidden disabilities, The Purple Princess company includes artists with epilepsy and other hidden disabilities, who have all been incredibly open about sharing their experiences.

“The Purple Princess was a wonderful way to introduce such an important and relevant subject to our children. The actors pitched the story and information perfectly and the children left the hall feeling empowered and happy.” Serena Bowen, Guildford Grove Primary School

The Purple Princess is touring local primary schools this Spring, including during National Epilepsy Week (24-30 May). The play will also be performed in Guildford’s Castle Gardens on 29 May and filmed so it can be viewed by the wider public on YouTube.

Find out more about The Purple Princess here or listen to our podcast special.

With thanks to South Western Railway