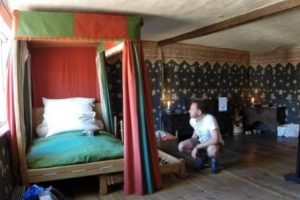 In August 2016, our Co-Founder Matt Pinches realised a long-held ambition to trace Shakespeare's footsteps from Stratford-upon-Avon to Shakespeare's Globe. After nine-days solid walking Matt arrived at Shakespeare's Globe at 4pm on Sunday 21 August, after completing the 146 mile long Shakespeare Way (he actually did 155 miles!)

Matt undertook the Bard Walk to raise money for our New Beginnings Campaign.

Matt made a 50-minute documentary film of the experience, which was premiered on 5 December 2017.

In total, the walk and associated events raised £15,970 towards our New Beginnings fund. THANK YOU SO MUCH!

Matt and GSC would like to thank the following people:

All the Air BnB members who donated accommodation