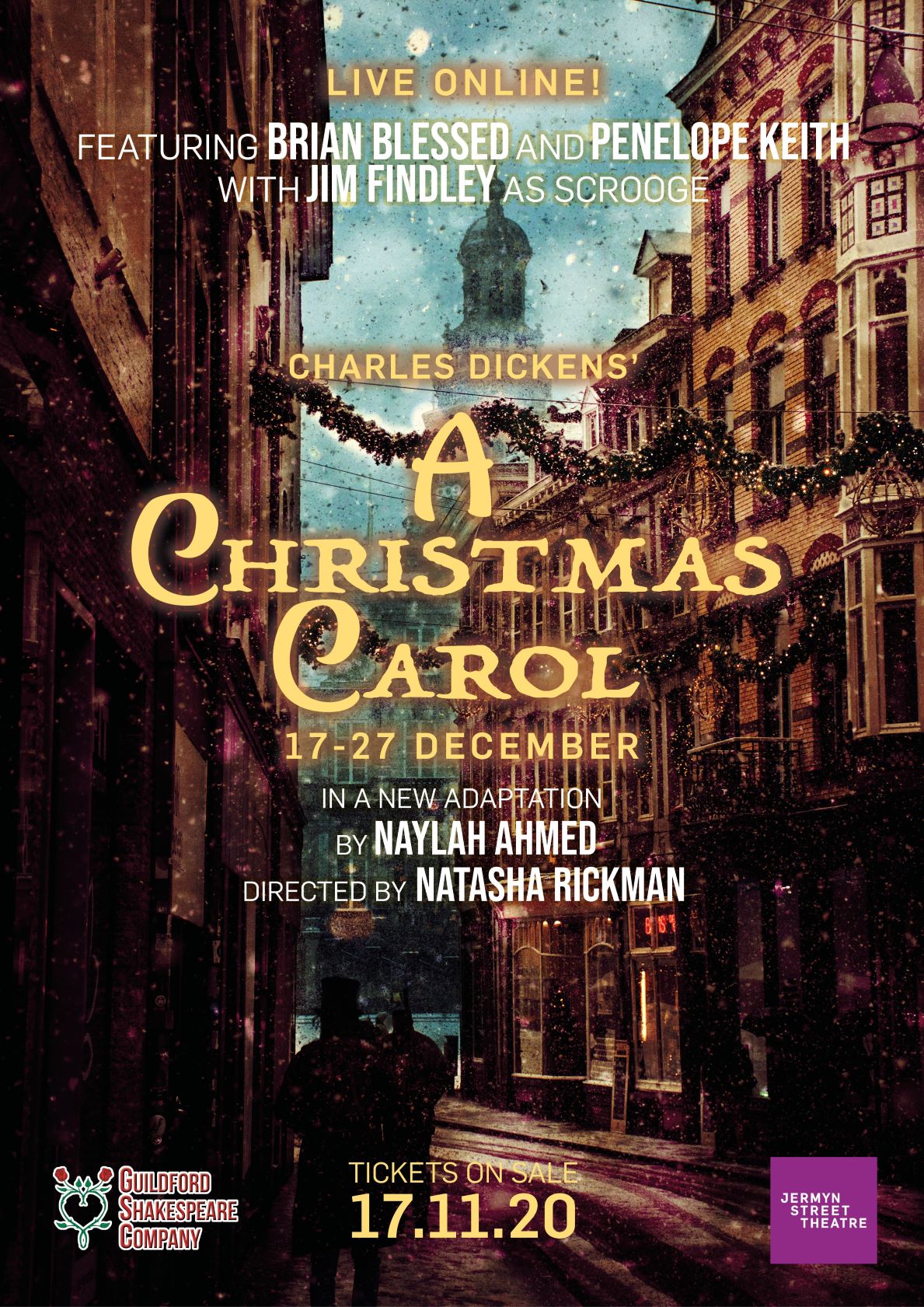 On Christmas Eve, the miserly Ebenezer Scrooge, who hates Christmas, is visited by four ghosts, seeking to redeem him from his terrible fate. Only by travelling through time, to the past, through the present and into the future, can Scrooge learn the error of his ways and save his soul. On Christmas Day he awakes a new man and promises to “honour Christmas in his heart and all year round”.

“Expect the first ghost when the bell tolls one…”

So begins a Christmas Eve unlike any other; one that will change Ebenezer Scrooge’s life forever… and a story that for over 170 years has joyously reminded us of the true meaning of Christmas.

"A testament to theatre’s powerful role in spreading and connecting high spirits all around."A Younger Theatre

We've teamed up with Jermyn Street Theatre to bring to life Charles Dickens’ thrilling story of compassion and redemption into your home, with the help of a couple of very special friends... national treasures PENELEOPE KEITH and BRIAN BLESSED will be playing the Ghosts of Christmas Past and Present. JIM FINDLEY will be playing the legendary grouch Ebenezer Scrooge.

MATT PINCHES, GSC Co-Founder: “We’re so excited about GSC's first Christmas show. Its themes of compassion and community have never been more important, and this innovative production will light up the hearts of all who see it. ”

Ghosts, time-travel, romance, and the biggest turkey in the shop (yes the one as big as you), wait in the snowy streets of Dickensian London; and who knows, you may be called up on to lend a hand in Scrooge’s journey too! So, put away the humbugs and grab yourself a mince pie and mulled wine as GSC and JST take you on a festive feast of an adventure, all from the comfort of your own home.

TOM LITTLER, Artistic Director of Jermyn Street Theatre: "What a festive treat!  Naylah and Natasha are creating a brilliant adaptation that will be enjoyed as much by grandparents as by grandchildren. Put your feet up on your own sofa, pour a glass of something delicious, and take a break in Dickensian London."

BRIAN BLESSED - Ghost of Christmas Present
Brian trained at the Bristol Old Vic Theatre School before beginning a distinguished and varied career, which has encompassed all media. Brian is now one of this country’s best known and most highly respected actors.

Television includes; ‘Augustus Caesar’ in I Claudius, ‘PC Fancy Smith’ in Z Cars; ‘Porthos’ in The Three Musketeers; ‘Pepone’ in The Little World of Don Camillo; ‘Spiro’ in My Family and Other Animals; ‘Richard IV’ in Black Adder; and ‘Squire Western’ in the BBC’s classic drama series Tom Jones.

On Film, Brian has played ‘Talthybius’ in Trojan Women, ‘Vultan’ in Flash Gordon; ‘Pedro’ in Man of La Mancha; ‘Long John Silver’ in Return to Treasure Island; and ‘Lord Locksley’ in Robin Hood Prince of Thieves. In Kenneth Branagh’s Henry V he played ‘Exeter’, in Much Ado About Nothing he played ‘Antonio’, in Hamlet he played ‘Hamlet’s Father and the Ghost’ and ‘Duke Frederick/Duke Senior’ in As You Like It. He played ‘Boss Nass’ in George Lucas’ Star Wars, The Phantom Menace, ‘Clayton’ in Walt Disney’s Tarzan and ‘Leonidas’ in Oliver Stones’ Alexander.

His Theatre credits includes ‘Old Deuteronomy’ in Andrew Lloyd Webber’s CATS, ‘Claudius’ in Hamlet, ‘Exeter’ in Henry V and ‘Hastings’ in Richard III at the RSC; ‘Maxim Gorky’ in State of Revolution and ‘Sir Tunbelly Clumsey’ in The Relapse at the RNT. He also played ‘Henry II’ in The Lion in Winter; and ‘Baron Bomburst’ in Chitty Chitty Bang Bang at the London Palladium.

For GSC he played the title role in King Lear in 2015, and appeared digitally in the 2019 Sonnet Walk Weekend.

PENELOPE KEITH - Ghost of Christmas Past
Penelope’s distinguished career, which spans stage, film, radio and television, began at the Webber Douglas Academy of Dramatic Art. Twice the recipient of a BAFTA Television Award, as well as an Olivier Award Winner, she is perhaps best known to millions from the hit TV series The Good Life and To The Manor Born, and is one of Britain’s most recognisable television screen actors.

Her most notable TV credits include The Good Life, for which she won her first BAFTA (Best Light Entertainment Performance), To The Manor Born, Sweet Sixteen, Moving, Executive Stress, No Job for a Lady, Law and Disorder and Next of Kin. She won her second TV BAFTA, for Best Actress in 1978’s The Norman Conquests.

On stage, Penelope has worked extensively in regional repertory theatre across Britain including seasons with the Royal Shakespeare Company. Her work has taken her into the West End with runs at The Savoy Theatre, Aldwych, and Vaudeville.

For GSC she was the voice of Hymen in 2013’s As You Like It and appeared digitally in 2019’s Sonnet Walk Weekend. For Jermyn Street Theatre she appeared in their recent lockdown event The Sonnet Project, and worked with JST’s Artistic Director Tom Littler on Bath Theatre Royal’s UK tour of Good Greif. She was also Honorary Patron of Tom’s production company Primavera.

In 1990 Penelope replaced Lord Olivier as the President of the Actors’ Benevolent Fund, a post she proudly holds to this day, and has served as both High Sheriff of Surrey and Deputy Lieutenant of Surrey. In 2014 she was appointed Dame Commander of the Order of the British Empire (DBE) for services to the Arts and to Charity.

Film includes: Cry Freedom, Socrates, Inside Out Of Mind, Playing Away.

He co-adapted and performed V.S Naipaul’s novel Miguel Street, as a critically acclaimed One-man show for Edinburgh’s Theatre Workshop, and Latchmere Theatre. Jim was the original Playboy of the West Indies at Oxford Playhouse, Tricycle and for BBC Theatre Night. He also appeared in Maya Angelou’s production of Moon on a Rainbow Shawl at the Almeida.

For GSC: The Tempest (Delight in Shakesepeare), ‘1st Witch, Donalbain, Fleance’ in Macbeth; 'Juliet' in Romeo and Juliet; ‘Alice’ in Alice in Wonderland (2015 & 2018 productions) and 'Marina' in a rehearsed reading of Pericles.

Theatre includes: ‘D.I. Beth Lehem’ in Away In A Danger (Lichfield Garrick); ‘Sophie’ in Lotte’s War (Take Note Theatre); ‘Hermia' in A Midsummer Night’s Dream (Creation Theatre); 'Holly' in A Silent Sentence (Sheer Height, The Park Theatre); 'Lindy' in The Old Friend (Who Said Theatre); 'Ella' in Tying The Knot (HookHitch Theatre) and 'Cordelia', 'The Fool' and 'Edgar' in King Lear (Creation Theatre).

Film and TV includes: 'Vicky' in What Happened To Monday (Netflix); ‘Bianca’ in Shakespeare and Hathaway (BBC), ‘Nell' in Father Brown (BBC) and 'Lisette' in Doctors (BBC). Lucy can currently be seen in adverts for BT Mobile and BeerMunch, as well as in music videos for Tom Walker and Paradisia.

Other unnamed characters played by the cast.

...and not forgetting our three young ensembles - Holly, Ivy and Mistletoe 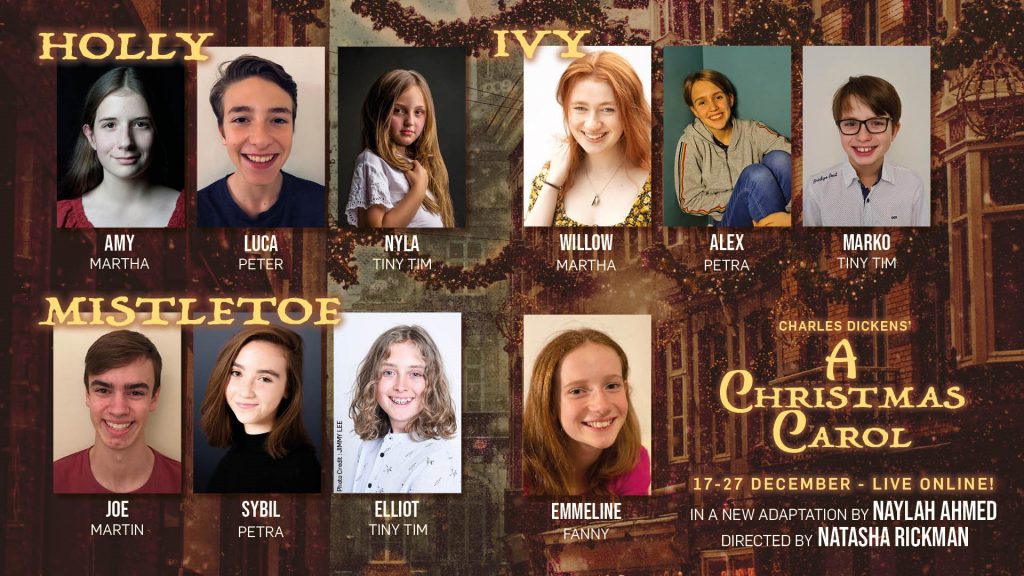 Naylah is an established writer for theatre, radio and TV, with extensive experience developing writers, ideas and story.

Naylah is a core writer on The Archers, and is based in Birmingham.

Natasha is an artistic associate at Jermyn Street Theatre.

Previous live digital productions include Time Machine: A Virtual Reality for Creation Theatre, which was seen by audiences in 18 different countries after its site-specific run at the London Library was cut short in March 2020; and Merry Wives of Whatsapp, also for Creation.

Natasha is an associate text and acting teacher at RADA, and has also delivered projects for ArtsEd and Identity.