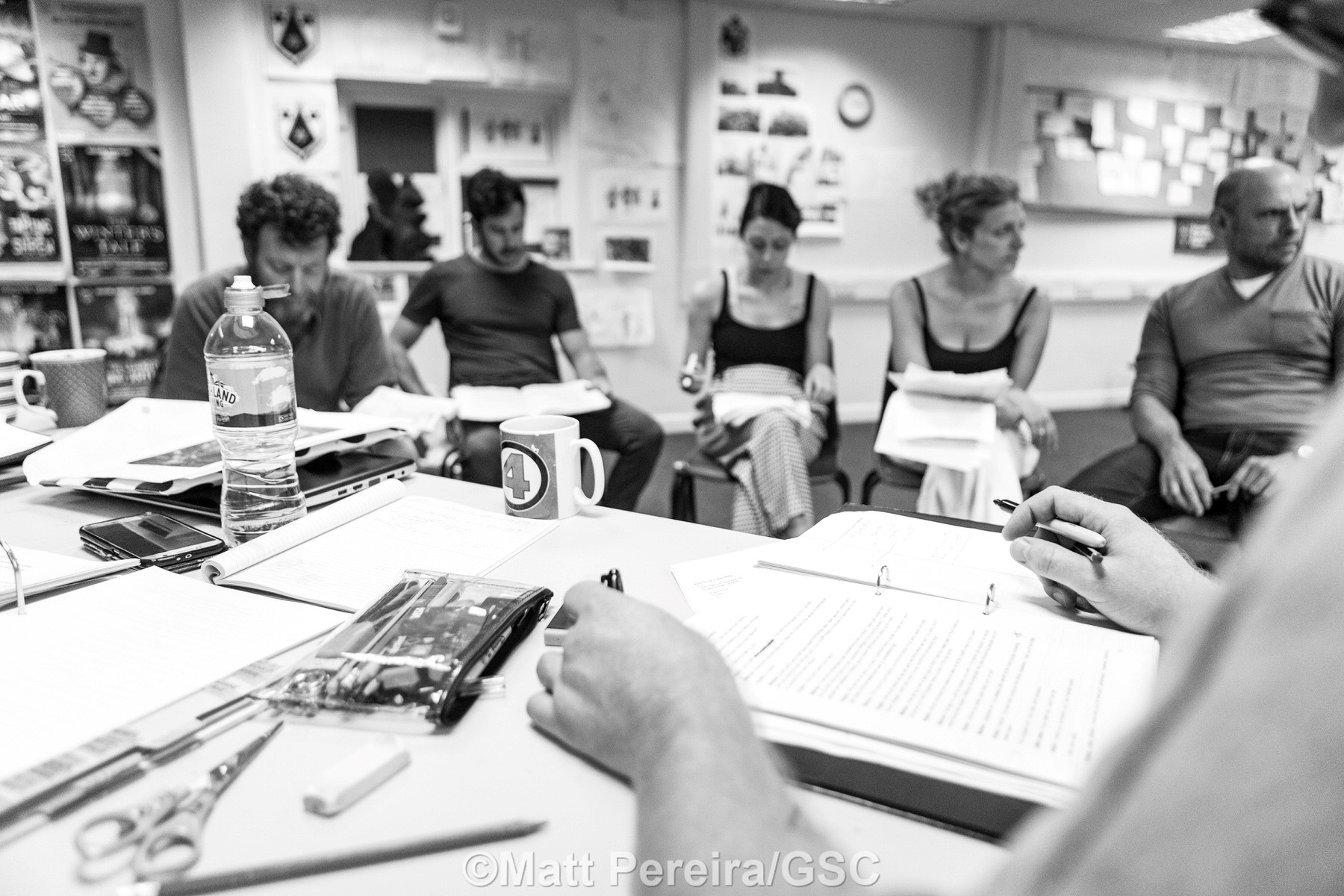 As time in the rehearsal room is coming to an end and the company move on site next week, we thought it might be interesting to look back at the characters we've been getting to know over the past few weeks.

The names of Robin Hood, Little John and Maid Marian, are famous across the world, and we all have our own ideas of who they are and what they represent...but the origins of their stories vary wildly.

For a start it is almost impossible to define where and when  the story of Robin Hood began. An Anglo-Norman French ballad, called Outlaw's Song, was popular shortly after 1305, which extolled the virtues of living in the woods and describes why there are outlaws living there, though there is no direct reference to Robin.

The first known account of a figure called Robin Hood appears in The Gest of Robyn Hode from around 1400, but this doesn't include figures such as Marian and Friar Tuck. The Gest is widely considered to be the fulcrum of the legend, from which all other tales spring. It contains references to Little John, Much the Miller, Will Scarlet and the Sheriff, but also features a much deadlier villain than the Sheriff we have come to know.

Nevertheless, Robin and his world clearly made a huge impact on society, so much so that Robin gets a name check in William Langland's narrative poem Piers Plowman, published c.1377:

I kan night parfitly my Paternoster as the preest it syngeth,

But I can rymes of Robyn hood and Randolf Erl of Chestre.

Randolf may not have stood the test of time, but clearly, as Sloth (the character) says, Robin was already more popular and memorable than the Lord's Prayer! Henry VIII was besotted with the legend and, apart from often holding many Robin Hood themed pageants, even burst in to Katharine of Aragon's bedroom in full Lincoln-green!

There is no single story that contains all the characters either: Little John is a stalwart character in a number of tales but also goes under the guise of Master Greenleafe; Scarlet is often Will Scathlock; Much the Miller beheads a page-boy in one story; whilst Alan-a-Dale doesn't appear until around mid-1600s, in a story where which Robin and Little John help prevent a marriage between Alan's love and an ageing old man.

Marian begins to turn up as an addition to the legend in the late 16th century as part of the May Day celebrations, as a sort of May Queen to Robin's King, joining in the Morris dancing. It was the later romantic period of the mid-1800s that elevated Marian into a member of the aristocracy, beginning the promotion of the love-story cemented in 20th century Hollywood movies. In some earlier stories Robin is married to a lady called Mathilde.

The Sheriff of Nottingham runs through most of the tales, but could be linked historically to number of real people: Geoffrey le Scrope, Eustace of Loudham, Brian de Lisle and Roger of Doncaster were all Sheriffs of the shire. But trying to establish an actual Sheriff is like trying to pin down a real Robin. Rather it is the theme of the Sheriff that endures throughout: as an oppressor of the everyday people. In some stories however, it is not the Sheriff that is the prime villain - the most notable one being Robin's own cousin.

Robin himself has been linked with many men of history: Robert Fitz Odo, Robert of Locksley, Robert Hood of Wakefield, a Robyn Hood in the service of King Edward II, and Robert Earl of Huntingdon. A 2-part play entitled The Downfall and Death of Robert Earle of Huntingdon by Anthony Munday, was commissioned by Shakespeare's rivals The Admiral's Men in 1598, in which the triumphant return to England of King Richard I is dramatised - fore-shadowing Sean Connery's arrival at the end of Prince of Thieves in the 1991 film. Interestingly, Shakespeare never used the legend as a basis for a play; though he does refer to "the old Robin Hood of England" in As You Like It.

All of these tales contain fragments of the story we all know and love, and most of our modern stories (and therefore films) are based on them. But the fact that there is no one true story means that for us as storytellers and theatre-makers we have a wonderful opportunity to add a new chapter to these character's enduring legacies, and the themes they represent.

Our Robin Hood remains faithful to the legends we have all grown up with, but we've also reached back in to the mists of time, delving in to some of these original folk tales for our characters' back stories.

Now, we don't want to give too much away before you see the show, but we thought it might be fun to give you a little background on the characters you're going to meet this summer.

Fearless leader of the outlaws in Sherwood Forest. Brilliant archer and swordsman, Robin can’t resist the limelight to shine, but is his past about to catch up with him? What was it that drove Robert Huntingdon into the forest two years ago, and will he ever be re-united with Lady Marian?

The last landowner in Nottinghamshire, Marian is the lone voice of independence in the county. Five years ago, her father, a favourite of King Richard, joined the King on Crusade leaving Marian to hold the family title; a title the Sheriff of Nottingham covets… but the Lady Marian may not be everything the Sheriff perceives her to be.

The amiable Friar knows the county like the back of his hand, often visiting the Beauvale Priory, delivering bread for the nuns and the orphans in their care. A man of the cloth, the Friar is a trustworthy and kind gentleman, though he does have a taste for mead and venison!

The hot-head of the outlaw band. Scarlet is convinced of wrong doing at the Beauvale Priory but her protests fall on deaf ears. An expert with a sword and knife, Scarlet is one of the best fighters in Sherwood, brave and loyal, but her quick temper is always a danger.

Robin’s closest ally and friend. A mountain of man, no-one can deny John’s courage and passion for standing up for what’s right. John was originally a blacksmith and has even worked in the kitchens of Nottingham Castle, going by the name of Master Greenleaf, but he found his true calling under the real leaves of Sherwood Forest.

Much’s journey to the forest has not been a happy one, evicted from her cherished way of life by the machinations of the Sheriff, but here amongst the trees she has found her role as the outlaw’s earth mother.

A former soldier for Prince John, Alan abandoned his post when he was asked to execute a man who was clearly innocent. No-one has a better set of eyes and ears, hence his role as the outlaws’ scout.

The Prioress of the Beauvale Priory

Respected throughout the county, her Reverence heads the order of nuns at the Priory, who as well their religious duties, take in and care for abandoned children. A woman who has devoted her entire life to the church, the Prioress is also Lady Marian’s aunt, who, in the absence of her brother to the Crusades, acts as Marian’s moral compass and confidante.

The Sheriff of Nottingham

Appointed by Prince John to administer Nottinghamshire, it is his job to ensure tax collection across the county to pay for the defence of the realm in King Richard’s absence. A vain showman, the Sheriff revels in his position and would be quite happy with his role if it were not for Robin Hood and the outlaws who make enforcing Prince John’s laws so difficult. Will he ever find their camp? What is his and Robin's history? ...and just what is his real name?