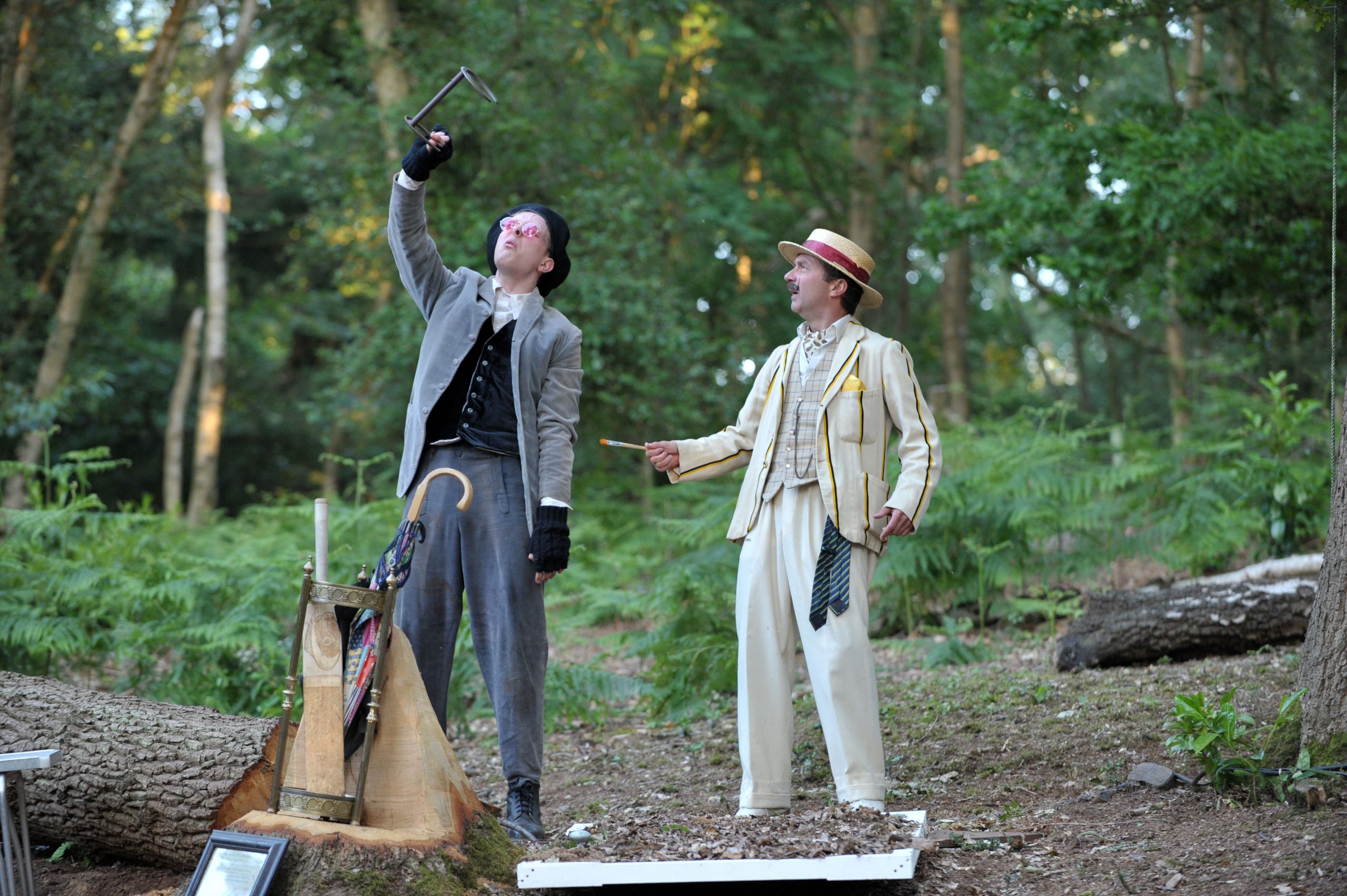 In 2015, we commissioned a new adaptation of The Wind in the Willows as part of our open-air season.

It was staged in the gardens and woodlands of Watts Gallery in Compton. Tom Littler, who directs our current online 're-imagined' version, also directed this 2015 show.

At the time we asked for his thoughts on the original story, his approach to that production and why The Wind in the Willows continues to endure to this day...

A new genre, and a new venue! Excited?!

Very excited about both of those things. I’ve had two very happy experiences directing Shakespeare comedies for GSC (As You Like It in 2013 and Twelfth Night in 2014), and I think we all wanted a completely fresh challenge.

Over the last twenty years our industry has really raised its game when it comes to ‘family theatre’. It used to be a genre which directors and writers were a bit snobbish about, so audiences were given something that was basically a kids’ show with a few jokes lobbed in for the grown-ups. Alan Bennett’s adaptation of The Wind in the Willows at the National Theatre was one of the productions that started pushing those boundaries. Why shouldn’t adults and children love the same scenes, the same stories, the same jokes? So I can’t wait to see how audiences react to our adaptation.

And as for the venue – wow. What a gift! It’s an enchanting place, and as soon as I first went up into the ‘Wild Woods’ I knew we had to do the show here.

Have you always been a fan of Toad and the gang?

It wasn’t an enormous part of my childhood but I certainly knew and liked the book, and when I returned to it as an adult I found it incredibly charming and touching, as well as very witty. The world it evokes – the same, perhaps, as that of Three Men in a Boat or Diary of a Nobody – is really special, I think. Possibly it’s a world that never really existed, but was always meant to be magical.

That riverside setting is very special to me: at home in Oxford, I live next to a canal with lots of barges (if not too many bargewomen!), plenty of ducks and geese, and the occasional water rat. I find the characters just irresistible, and then I’m just so taken with the adaptation that Ant Stones has written for GSC – it’s full of lovely details and characters.

What do you think is the enduring appeal of Grahame’s story?

Grahame wrote the story for his son, nicknamed ‘Mouse’. Grahame and his wife went on holiday to Cornwall when Mouse was seven, and the only way that Mouse could be pacified into staying at home with his nanny was the promise of regular letters telling him a story. So that’s how the novel began. You can see the letters in Grahame’s beautiful handwriting in the Bodleian Library, and some of them make it into the novel virtually unchanged.

It looks at first glance as if it’s a story about animals by a river bank and in a wood.

Of course it has virtually nothing to do with animals. It’s really about grown-ups and how they behave. Those four characters who are at the centre of the story – Toad, Rat, Mole and Badger – would, I’m sure, be totally recognisable to an Edwardian child. Hopefully recognisable ‘types’ now, too! It’s a story about how you fit into the world. None of those four are getting it quite right at the beginning of the story – whether they are too reclusive, too timid, too grumpy, too boastful – but during their adventures they learn such a lot about how to relate to each other, and the little ways in which they can live according to others’ needs as well as their own. It’s very important that you don’t feel they lose their individuality, though – Toad is still Toad at the end of the story!

What has been the biggest challenge in realising the story here?

Well, you’re asking me these questions before we’ve started rehearsing! So my work is only half done… We were incredibly lucky to find this venue, and then to find a writer who was right under our noses here at GSC!

Adapting a novel for the stage is quite a brutal process. There’s just much, much more time in a novel than there is in a play. So making decisions about what to leave out was fairly ruthless. I’m sure lots of people who know the book will be disappointed that some of their favourite lines and episodes haven’t made it into the adaptation – sacrificed on the altar of ‘running time’!

The other challenge is finding a language and a technique for the narration. We didn’t want an external narrator saying ‘Once upon a time...’, but – though we tried it out – having an adaptation that leaves out all of Grahame’s narration and description felt very sparse. You are forced to have a lot of lines like ‘Goodness, what’s the time?’, ‘We’ve travelled a long way’, and ‘Ouch, that car really hurt me’, whereas by using some of the Grahame narration you can tell the story more fluidly. You also get to enjoy some of that beautiful language that he writes in – for me, that makes the story richer and more textured. Hopefully the audience will agree!

The setting we have here is quite special. Was there something you wanted to achieve in particular with this adaptation of Willows?

In all three of the productions I’ve done for GSC, all designed by the brilliant Neil Irish, I’ve tried to allow the space itself to lead the design process. So in As You Like It we had the manor house and then that vast, multi-levelled playing space for the Forest of Arden in the Law College; for Twelfth Night we took our Victorian setting from the architecture of the Castle Gardens and bandstand. With Willows we wanted something quite pictorial for lots of the scenes set against the house – we’re in an artists’ hamlet, after all! And we wanted to use the woods of course, and the driveway…

It also made sense to have a framing device in the story, which explained that Rat and Mole are writers and artists living in the Watts Village, and looking back on their adventures when they were younger.

This conversation originally appeared in the programme in 2015