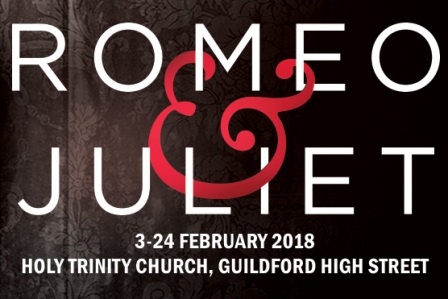 With rehearsals about to get going for Romeo & Juliet, we thought we’d introduce you to our cast with a little more detail. Click here to see them

We’re absolutely thrilled to have HARRIET THORPE joining us to play Juliet’s Nurse. Her wonderful comic timing and warmth are the perfect ingredients for this fabulous character. Romeo & Juliet is a famously tragic love-story, but there is also a lot of joy in the play, and that is fuelled by characters like the Nurse.

Harriet is one of Britain’s best loved actresses, best known for her roles in ABSOLUTELY FABULOUS, THE BRITTAS EMPIRE,  FRENCH & SAUNDERS and feature films CALENDAR GIRLS and AB FAB THE MOVIE. Her theatre credits include West End hits WICKED and MAMMA MIA!, as well as numerous appearances at THE NATIONAL THEATRE, most recently in Richard Bean’s GREAT BRITAIN.

The title roles will be played RICKY OAKLEY and LUCY PEARSON. Ricky joins GSC for the first time, whilst Lucy last worked with us in 2015, playing Alice in our promenade production of Alice in Wonderland, staged to celebrate the 150th Anniversary of the book’s publication, and Guildford’s links to Lewis Carroll.

We’re delighted that there are number of actors joining GSC for the first time, including GORDON COOPER (Lord Capulet) who has been touring the world with STICKMAN, and a regular at the KING’S THEATRE in Glasgow; ROBERT ELKINS (Benvolio) who toured this summer with the LORD CHAMBERLAIN’S MEN, and appeared in BBC TV’s PEAKY BLINDERS; and RIKKI LAWTON (Tybalt/Paris) who is a regular voice over artist for BBC RADIO and has enjoyed a number of seasons at THE MILL AT SONNING.

Familiar faces that we’re looking forward to working with again include two actors who appeared in our 2017 shows: NOEL WHITE (Friar Lawrence) played Merlin in The Legend of King Arthur and the title role in Julius Caesar last year, whilst JACK WHITAM (Mercutio) was in this summer’s double-bill of A Midsummer Night’s Dream as Demetrius/Flute, and Proteus in The Two Gentlemen of Verona.

You can read more about the cast in the special 32-page Souvenir Programme which will be on sale at every performance.