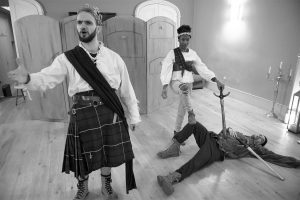 Looking closely on the streets of Guildford this month, you might have found not one, but two GSC companies. While the Romeo and Juliet cast rehearsed, the actors on our schools tour of Macbeth have been busy practising their evil cackles, sword fights and puppetry.

We’ve been working with the excellent Delight Charity since 2016, taking Shakespeare plays and workshops to ten disadvantaged Primary Schools in Surrey. The cast of four actors involve the children throughout, with soundscapes, slow motion fights and – the secret fifth member of the cast – ‘Little Will’. Yes, Shakespeare himself also makes an appearance! As part of the performance, children are also invited to step up on stage to take on characters, such as King Duncan and the Witches. Even teachers aren’t safe, as one lucky staff member becomes Macduff in the final fight to the death.

The performances are followed by several workshops, which help the children create their own performance for family and friends. Most of the children involved will have never been to the theatre before and we’re proud to have reached over 2,000 children in the last three years, allowing them to watch and study multiple Shakespeare plays before they’ve even reached secondary school.